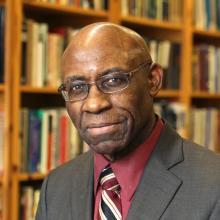 Welcome to a new season of Off the Shelf! In this season opener, host Augustus Wood and guest Joe William Trotter Jr. (history and social justice, Carnegie Mellon University) engage in a deep discussion of Black working class history, grounded in Trotter's pathbreaking research and published works, notably Black Milwaukee: The Making of an Industrial Proletariat, 1915-45 and Workers on Arrival: Black Labor in the Making of America.

Trotter illuminates an often-untold story: that Black labor was essential to the building of industrial America and that workers "produced and enriched the cities in which they lived." Wood and Trotter unpack why the story of Black labor must include not only workers' agency and productivity, but also an accounting of the struggles experienced then and now. Note: this episode was recorded in May 2022.

Joe William Trotter Jr. is the Giant Eagle University Professor of History and Social Justice and past History Department Chair at Carnegie Mellon University in Pittsburgh, Pennsylvania. He is also the Director and Founder of Carnegie Mellon’s Center for African American Urban Studies and the Economy (CAUSE), President Elect of the Urban History Association and a member of the American Academy of Arts and Sciences. His latest publication is Workers on Arrival: Black Labor in the Making of America (University of California Press, 2019). Professor Trotter received his BA degree from Carthage College in Kenosha, Wisconsin and his M.A. and Ph.D. degrees from the University of Minnesota. He is currently working on a study of African American urban life since the Atlantic slave trade.

Dr. Trotter teaches graduate and undergraduate courses in African American and U. S. urban, labor, and working class history. He has delivered scholarly papers and lectures in a variety of professional forums in the United States and abroad, including institutions of higher education in the United Kingdom, France, Germany, Russia, the Netherlands, and the Middle East. He has served on the boards and committees of numerous professional organizations: Executive Council, OAH; Chair, Nominating Committee, OAH; OAH Program Committee; Executive Council, SHA; Program Committee, SHA; Francis B. Simkins Prize Committee, SHA; Immigration History Society Executive Board; Jameson Fellowship Committee, AHA; Program Committee, Oral History Association; chair of the annual Program Committee of the American Historical Association. He has also served as a member and Vice President of the Board of Trustees of the H. John Heinz III Regional History Center, a Smithsonian Affiliate, and past President of the Labor and Working Class History Association.