Off the Shelf Podcast

"Off the Shelf: Revolutionary Readings in Times of Crisis" is a podcast series featuring in-depth conversations with Black scholars on the University of Illinois campus and beyond. Each episode explores books and scholars they recommend we take “off the shelf” to help us understand these revolutionary times and creative agendas for the here and now.

Season 2, Episode 5: Alonzo Ward on the Hidden History of Black Labor in Illinois

In this episode, Dr. Ruby Mendenhall discusses the interconnection of racial oppression, trauma, and violence with both physical and mental health. Learn about her current projects, including a MacArthur-funded initiative to create programming and wellness tools (such as art and a forthcoming wellness store) to foster healing from racial trauma in Black and Latinx high school students and young adults living in Chicago. Along the way, she highlights the scholars, works, and mentors who informed her path forward. Listen now; view episode show notes and transcript

Season 2, Episode 3: Charisse Burden-Stelly on the Intersection of Antiblackness and Antiradicalism

Dr. Charisse Burden-Stelly (Carleton College) takes listeners through a rich list of works and thinkers that have informed her scholarship. Walter Rodney, Patricia Rodney, Winston James, Claudia Jones, Safiya Bukhari, and William Alphaeus Hunton are just a few she highlights, pointing out that some may be less known because of what she terms “intellectual McCarthyism.” The author and editor of numerous publications herself—including the recent W.E.B. Du Bois: A Life in American History (with co-author Gerald Horne), Organize, Fight, Win, and the forthcoming Black Scare/Red Scare—Burden-Stelly elucidates the deep-rooted, longstanding connections between antiblackness and antiradicalism, and offers a thoughtful take on the state of Black Studies today. Listen now; view episode show notes and transcript

Season Two of "Off the Shelf" continues with historian and Illinois alumnus Dr. Edward Onaci (Ursinus College), author of Free the Land: The Republic of New Afrika and the Pursuit of a Black Nation-State. Through his work, Onaci looks deeply into the history of the New Afrikan Independence Movement—not just in documents and news sources, but through the personal stories of the people who lived it—and the implications for today's Black liberation movement. Listen now; view episode show notes and transcript

Season Two of "Off the Shelf" opens with the fascinating and timely research of alumna Professor Ashley Howard (University of Iowa), a historian whose analysis of 1960s urban rebellions in the Midwest sheds light on contemporary resistance movements to racialized oppression. In her discussion with host Augustus Wood, Howard references some of the works that have influenced her scholarship, from Brent Campney to Ruth Wilson Gilmore, and Martin Oppenheimer to Johan Galtung. Listen now; view episode show notes and transcript

See the full season one archive of "Off the Shelf."

Augustus Wood is a scholar of political economy and gentrification, labor, and social movements in late 20th and early 21st Century African American urban history. A past HRI campus fellow (2017–18), he is currently a postdoctoral research associate in the Labor Education program at the University of Illinois Urbana-Champaign.

Dr. Wood has authored articles that appear in the Labor Studies Journal and co-authored book chapters with Dr. Sundiata Cha-Jua. He is the editor of the upcoming special edition of Labor Studies Journal on Black Workers and COVID. He is a contributor on Routledge’s forthcoming Encyclopedia of Antiracism. He is also a member of the editorial board of the Humanities and Social Sciences Journal. He hosts the "Radio Free Labor" program on 90.1 FM WEFT Champaign Radio. Learn more about Augustus Wood. 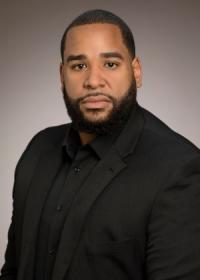