Season Two of "Off the Shelf" continues with historian and Illinois alumnus Dr. Edward Onaci (Ursinus College), author of Free the Land: The Republic of New Afrika and the Pursuit of a Black Nation-State. Through his work, Onaci looks deeply into the history of the New Afrikan Independence Movement—not just in documents and news sources, but through the personal stories of the people who lived it—and the implications for today's Black liberation movement. Host Augustus Wood takes listeners through Onaci's book and more, including a survey of the texts that shaped Onaci's academic and personal path: from rappers Poor Righteous Teachers and Talib Kweli, to The Autobiography of Malcolm X, Toni Morrison’s The Bluest Eye, Imari Obadele’s Foundations of the Black Nation, and Saidiya Hartman’s Lose Your Mother.

About the Guest: Edward Onaci 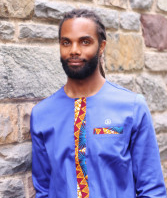 Edward Onaci is an associate professor of history at Ursinus College, where he teaches courses on African American history, modern U.S. history, women’s global political struggles, social movements and music in Africa and its diaspora, and more. They incorporate interdisciplinary scholarship and emphasize student empowerment. Dr. Onaci’s instruction also makes use of creative resources and high impact tools, such as Reacting to the Past and Digital Liberal Arts projects. His approach encourages students to take ownership over their personal and group studies, produce their own knowledge, and apply what they learn in class to their current lives and future ambitions.