For students in the humanities research lab class HIST 386: Public History: Policing in the United States, community engagement was not a single experience but built into the very structure and goals of the class. Taught by postdoctoral researcher Dr. Tariq Khan (History) in spring 2022, the course's collaborations led to a student-created website exploring the rise of gun violence in Champaign-Urbana. 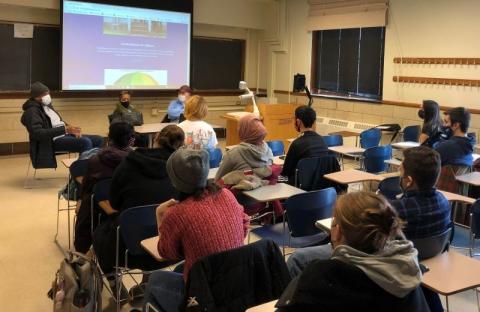 The class included 18 students from a variety of backgrounds, including history majors and minors as well as other humanities and non-humanities students. The mix of majors was beneficial, said Khan, because each student brought their unique set of skills and interests. While some were well versed in conducting research, others were adept at analyzing data and creating data visualization.

Khan conceived of the course in two main components: the classroom portion, which was a history of policing informed by the uprisings of the past few years, and a community engagement portion. For the latter part of the class, students collaborated on a project with First Followers, a local non-profit organization that supports formerly incarcerated people as they reenter society. For staff at First Followers, said Khan, "the work is really a labor of love."

He underscored that working with the public requires flexibility and adaptability, because resources are limited, people are operating on different schedules, and circumstances can change quickly. The key to a successful experience, he said, is that community partners should be engaged as full collaborators who have as much to contribute and gain as the students—not just as research subjects.

Their project concept evolved over the semester,  ultimately landing on the idea to research some of the historical, structural, and social causes underlying the recent surge in community violence. While still a work in progress, their website A Safe CU documents a national history of policing alongside local context around deindustrialization, gender and race, segregation, housing, income inequality and other facets, as well as interviews with First Followers members.

James Kilgore, director of advocacy and research at First Followers, explained, “[Tariq] asked us a question no university professor had ever asked us before: ‘How can I mobilize my students to help First Followers?'  And we came up with this idea of doing research on the historical background of community violence in Champaign-Urbana." Thanks to the research the students did, he said, "First Followers has a resource for the community.”

At the end of the semester, the students presented their work at the First Followers Center in Champaign, followed by a discussion with members of First Followers and other community members invested in working on the problem of community violence.

In addition to the project with First Followers, Khan designed the syllabus to include guest speakers from the community. "The students can learn in a way that they don’t in a typical classroom. You can see them making connections, understanding things for the first time, because of their interactions with our community partners."

He is hopeful that their research will make a difference, adding “I think it could have a really positive impact on the conversation about gun violence."

You can read about the inaugural humanities research lab course, "Humans and Animals: Friends or Food?" (ANTH 126). HRI currently has an open call for proposals designing the next HRL course for spring 2023. The initiative is a collaboration between HRI and the Office of Undergraduate Research.